RSS
← These are Perilous Worlds!
It’s been too long and Advanced World of Shadows via Facebook (?!) →

A long time ago, in a galaxy far, far away…

It is the height of the galactic civil war and a dark time for the galaxy. The tension between the Galactic Empire and the Rebel Alliance continues to escalate into the year. The Battle of Yavin and the destruction of the death star are critical successes for the rebellion. A new hope is born. Infuriated by the defeat, Emperor Palpatine viciously lashes out against many of the Outer Rim worlds thought to be harboring people loyal to the rebel cause. The dusty desert planet of Tatooine is no exception. In the city of Mos Eisley, celebration erupts in the streets as news of the rebel victory at Yavin leaks out, but Imperial Storm Troopers open fire on the raucous crowd, inciting a riot that gets out of control and spreads throughout the whole city.

An Imperial police crackdown falls into effect immediately, but the Storm Troopers are highly outnumbered despite the presence of a fully staffed garrison base in the center of the spaceport. The chaos in the city creates for an opportunity rebel militia and criminal elements in the area. The local gangs and mercenary houses use the confusion of the riot to strike at each other, spurred by various feuds and grievances. At the same time, local rebel forces begin to skirmish with the imperial occupancy while recruiting more and more disgruntled people to the cause. It‟s a turbulent time in Mos Eisley and the power players are making their moves, so look sharp, keep your blaster close, and never strike a deal with a Hutt.

Oh, and may the force be with you. 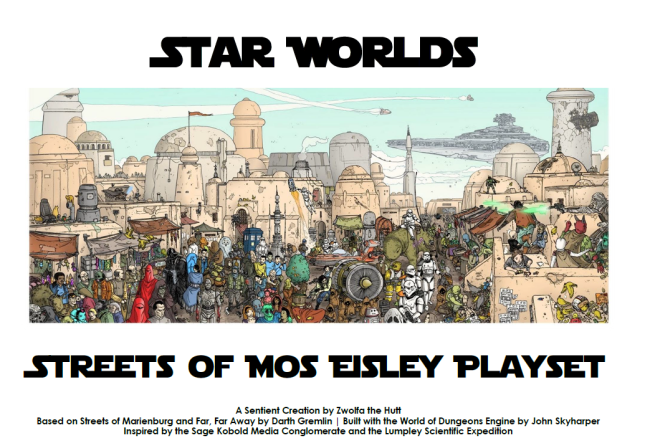 This is my latest project. It’s a quick-play hack set in the Star Wars universe during the peak of the galactic civil war, just after the destruction of the first Death Star. It is directly influenced by Michael Wight’s Streets of Marienburg Playset which is a reskin for John Harper’s World of Dungeons, which is a distilled version of Dungeon World by Sage LaTorra and Adam Koebel. Ultimately, it’s all based on Apocalypse World by Vincent Baker. The art has been shamelessly borrowed from Wookiepedia.

Posted by Zack Wolf on December 28, 2012 in Development, General Posts

← These are Perilous Worlds!
It’s been too long and Advanced World of Shadows via Facebook (?!) →

35 responses to “The Streets of Mos Eisley Playset – Version 2.1”